State of Nature explores the stories of our native forests through the paintings of artist Fanny Bertha Good (1860-1950) and her family’s experiences as early pākehā settlers in South Taranaki. After losing her hearing as a teenager, Fanny spent hours exploring the bush near her home in Ōeo, collecting plant and fungi specimens for her work.

Many of the species she painted are now critically endangered or naturally rare due to generations of bush clearing that began with the establishment of townships and farms across the region. The exhibition examines the history of this mass deforestation alongside the role of botanical art and illustration in the settlement of Aotearoa, placing Fanny’s work within this wider context.

Puke Ariki holds over 200 paintings by Fanny. Most of these depict native plant species that she has identified, either by their scientific name or Māori name, on the back of each painting. Her work is more expressive and bolder than traditional botanical art, but with an attention to detail that allows different species to be recognised and studied.

Fanny’s fungi paintings take on a different format. Some of them are divided into rectangles like specimen boxes, while others place diverse species side by side in wide panoramas. Compared to the more aesthetically composed botanical specimen works, these paintings seem to be studies, with some mushrooms playfully flipped upside down to capture their gills. Fungi didn’t seem to be Fanny’s scientific specialty as she only identified a very small number of species. Yet, her treatment of the diverse examples she depicted indicates the same emphasis on accuracy as seen in her botanical works.

Due to the quality of her materials, many of Fanny’s paintings have sadly discoloured, some of them taking on a pale ghostly bloom. Just as the details of these works have been lost over time, so have the details of Fanny’s story. She left us no diaries or letters that might have shed light on her passion for the natural world. She might have shared stories and specimens with friends elsewhere (some of her paintings show specimens she wouldn’t have had access to in Taranaki) and what her life was like as a young woman with hearing loss in colonial New Zealand. By sharing her work at the museum and in both creative and scientific communities, I hope to piece together more of her story and see her recognised as one of Aotearoa’s early botanical artists. 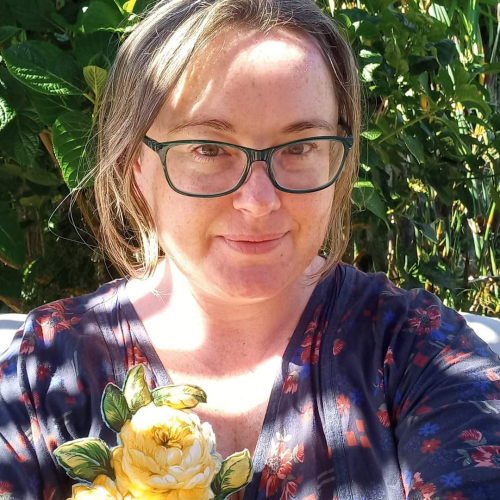 Chanelle Carrickhttps://pukeariki.com/
Chanelle is the curator of pictorial collections at Puke Ariki Museum in Ngāmotu/New Plymouth, New Zealand. She's responsible for the care and development of a vast collection of photographs and artworks that tell stories of the Taranaki region's past and present. With a background in art history and anthropology, and a growing passion for sustainability and permaculture principles, Chanelle is drawn to those rare moments in her work when creativity, community and nature converge. You can usually find her in the garden.

Fungi in the Fiordlands

Today the rain has stopped and sunlight edges above the clouds, awakening the forest to a multitude of emerald hues. Camera in hand, I amble in awe through the Kepler Track and observe the...

The Alienness of White Basket Fungus

Ileodictyon cibarium is a saprobic species of fungus meaning its formed from the process of decaying dead organic matter. Commonly known as white basket fungus or stink cage, they grow alone or cluster together...

Observing different characteristics of mushrooms can spark the imagination. What nature provides can be stranger than most science fiction. Their various shapes and colors seem to defy the laws of nature and reality. Not...

The popular and common classic umbrella-shaped cap typically comes to mind when most people think of mushrooms. But there are myriad fungi species that exist that don't explicitly rely on spreading spores via gills....

Exploring the forest floors of the world.